Tempestuous Temperaments
Jin (仁, Benevolence) is one of the main male protagonists of Samurai Champloo. He is one of Fuu's two bodyguards, along with Mugen and a former student of kenjutsu who, after killing his own master in self-defense, fled and eventually became involved with Fuu and Mugen.

He is voiced by Kirk Thornton in the English dub and voiced by Ginpei Sato in the original Japanese version.

During the title cards, his totem is a koi fish 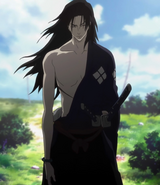 Jin with his hair down

Jin is a bespectacled young man with long black hair that is tied in a low loose ponytail with two strands framing his face on either side and dark-brown eyes.

His attire is a simple indigo blue haori that is adorned with multiple symbols that are four squares in a diamond formation on the right pec, sleeves and back of his haori and a white keikogi and hakama. He wears a teal beaded bracelet on his right wrist. His pair of glasses is purely ornamental as Mugen later found out after getting a chance to peer through them.

In the anime and manga, young girls and women find Jin attractive and handsome that Fuu also admits this in her diary in The Disorder Diaries.

Unlike Fuu and Mugen, Jin is a calm and collected guy under the most dire of circumstances as he leads both Fuu and Mugen to confide in him. However, his stoic demeanor can irritate his companions since he responds to their thoughts with sighs or grunts. By his own admission, Jin has spent most of his time focusing on improving his skills and almost no time at all on cultivating friends. This lack of companionship means that he values the friendship of Fuu and Mugen as he seems genuinely saddened when the three part ways. Although the two annoy him on occasion, he is often willing to take on an extremely deadly opponent alone in order to allow them to escape.

Jin also seems annoyed by those who use their martial arts skills to oppress people, especially those who proclaim that they are doing it in service of their lord. Jin will often remark that there is no honor in serving a cruel tyrant. When Jin was 18, Enshiro Mariya (Jin's sensei) told him that he was going to change his dojo into a school for assassins. When Jin opposed the change, Kariya Kagetoki, who was pulling Enshirou's strings, ordered him to kill his star pupil and intended successor. However, Jin instead killed Enshirou and fled the dojo. Throughout the series he is hunted by his former classmates at the dojo as well as several other ronin who wish to kill him and make a name for themselves.

It should also be noted that he rarely smiles throughout the series. This could be because of the loss of his parents at an early age, the enormous amount of training and being rejected by his classmates.

Jin was trained by his sensei Enshiro Mariya in his dojo, where he became his favorite pupil. Jin also was friends with a samurai name Yukimaru whom he considered as a brother. One day, Enshiro asked Jin what would he think about turning the samurai school into a school for assassins due to Kariya Kagetoki's request. Jin refused, and Kariya ordered Enshiro to kill Jin in his sleep. Jin reacted instinctively, killing his master by mistake before fleeing as a fugitive. This causes many ronins and samurais to go after Jin since he killed a skilled master.

In Tempestuous Temperaments, Jin sees corrupt officials bullying someone, and kills them. While walking to Fuu's restaurant for a meal, a vagabound name Mugen assumes Jin is the governor's son bodyguard, and they both fight for an even amount of time. During the battle, a man name Ryujiro burns the restaurant down, framing Mugen and Jin while also killing the governor's son.

The governor orders Mugen and Jin to be executed but Fuu manages to help them escape by throwing fireworks at the officials. Fuu, Mugen and Jin meet up, and Fuu manages to meet up with Mugen and Jin who are about to rekindle their fight from earlier, but she tries to stop them since she still needs the favor from them. She decides to settle it by flipping a coin, which Mugen decides to flip for her. It comes up heads, meaning they don't need to escort Fuu, but Fuu lies and says its tails before being chased by government officials.

Mugen, Jin, and Fuu would meet Ryujiro again, and kill him alongside with Inuyama and Oniwakamaru. Mugen, Jin and Fuu would go on to have many adventures together. Often times they split up due to being annoyed with Fuu, but would come back to help Fuu in the end. The first example in Hellhounds for Hire (Part 1) was when Mugen and Jin ditched Fuu, but would come back to take on Nagamitsu and his Yakuza gang. Jin would also meet Heitaro Kawara and Sousuke Kawara .

In Misguided Miscreants (Part 1) and Misguided Miscreants (Part 2), Mugen, Fuu and Jin would go back to his home islands where Jin meets Mugen's "childhood friends" Koza, Mukuro. Mugen is persuaded by Mukuro to raid a pirate ship. However, Mukuro sets the ships to explode to kill Mugen, while also deforming three officials that will fight Mugen in the future (Denkibou, Umanosuke and Toube). Koza asks Jin to kill Mukuro to avenge Mugen, and Jin agrees (while also a little bit angry that Mukuro killed Mugen first), but realizes Koza used him to get the money from Shiren (a government mole).

The trio would meet Joji Titsingh, and help Jin would fall in love with a woman name Shino and rescue from a brothel in Gamblers and Gallantry. Jin would escort her to a safe place, with Shino promising Jin that she would wait for him. During Beatbox Bandits Mugen accidentally gets high with criminals, forcing Jin and Fuu to be held captive until late afternoon. In Lethal Lunacy Jin observes Mugen learning about ki to defeat Shoryu.

In Unholy Union Mugen and Jin would help expose Xavier III for using Christians to create guns, and War of the Words Jin would meet two individuals who used to be in his dojo. In Elegy of the Entrapment (Verse 1) and Elegy of the Entrapment (Verse 2), the trio would meet a woman name Sara. Sara asks Fuu to pick one of her escorts to help Sara to a destination, and Fuu selects Jin.

However, during the rope bridge its revealed that Sara was trying to kill Jin, and gains the upper hand. Jin barely escapes by cutting the rope bridge (while also underestimating her at first) and is injured but is healed by a fisherman who teaches him the concepts of ki. Jin would go back to Mugen and Fuu, and tells Mugen about ki that enabled Mugen to initially hold a upper hand against Sara.

Mugen, Jin, and Fuu would eat mushrooms which cause them to hallucinate events in Cosmic Collisions, and play in a baseball game against American baseball players, with Mugen winning the match. In the three part series finale, after Fuu leaves them to face her father Seizo Kasumi, Mugen and Jin encounter Kariya Kagetoki, the Hand of God (Shogunate's right hand man).

Mugen tries fighting against Kariya, but loses due to Kariya's overwhelming skill and power. Kariya praises Mugen's unpredictable fighting style, but notes that Mugen's skills are limited as a result. Kariya fights against Jin with Mugen trying to help but Kariya brushes him aside. Denkibou arrives and tells Mugen that his brother Umanosuke and Toube capture Fuu on the island. Mugen tells Jin to defeat Kariya while he rescues Fuu.

Kariya Kagetoki and Jin stop fighting to talk about how the age of the samurai is slowly coming to an end (due to the rumors of the Mongols, and the rise of Christianity in Japan), and Kariya agrees with Jin that the lords don't really care about the people. Kariya also praises Jin's high level of skill, saying that this next fight will be determined by a close margin. The two strike, with Kariya victorious.

After Kariya Kagetoki kills Seizo Kasumi, its revealed that Jin survived thanks to his master's training. When Jin and Kariya fight again, Jin willingly gets himself hurt to stab Kariya's chest (thanks to his master's secret move). However, Jin is gravely injured, and is startled by an explosion caused by Toube. He sees Mugen barely injured (after killing Denkibou and Umanosuke). Mugen and Jin agree for their final fight, with Fuu trying to stop them, but to no effect.

However, both their swords shatter and both of the combatants collapsed. Mugen and Jin admit they don't want to kill each other since they see each other as friends, with Fuu crying in relief. Mugen and Jin rest for a week before meeting with Fuu to depart. Fuu tells the two that she lied about the coin toss in Tempestuous Temperaments to get the two of them to go with her, which shocks Mugen and Jin before the trio part on good terms with Jin possibly planning to meet Shino once more.

Jin uses orthodox Kenjutsu moves. Unlike Mugen, who uses improvisation and adaptation to win, Jin seems to rely on technical skill, on which he is extremely proficient. Jin is easily one of the most accomplished swordsmen in the Samurai Champloo world as he has survived crossing swords with Mugen, Sara and even Kariya Kagetoki. He is also shown to have an advanced growth rate. While struggling to keep up with Sara, by the time he faced Kariya, Jin could perceive the legendary foe's every move and launch a counterattack, openly being applauded by Kariya who has very high standards. Ultimately, Kariya acknowledged Jin as a worthy opponent nearly at his level. Although many of these battles have ended on an inconclusive note, his ability to survive the encounters with these individuals is a testament to his abilities. Although he seems incapable of picking up skills with the same ease as Mugen, he often learns about an opponent's philosophy in order to determine their strengths and weaknesses. Alternatively, Jin's reluctance to accept taking on new fighting styles may be related to the purist attitude Jin goes about with his own fighting style, as indicated during the title cards. It also sets him apart from Mugen, who readily copies his opponent's fighting styles and moves into his repertoire. Therefore, it could be argued that his clinical approach leaves very little margin for errors in observation and anticipation, making his fighting style a very notable foil against Mugen's.

The Mujushin kenjutsu (Jin's style of sword fighting) has been characterized as the "purest and most ethereal art of the sword (here). While the Mujushin Ryu itself was short lived, its philosophy was revered by disciples of the way of the sword. In addition to be a master swordsman and while rarely seen, Jin is an equally proficient martial artist. Using a combination of karate and jiujitsu, Jin can seamlessly fend off and defeat multiple armed foes.

Community content is available under CC-BY-SA unless otherwise noted.
Advertisement